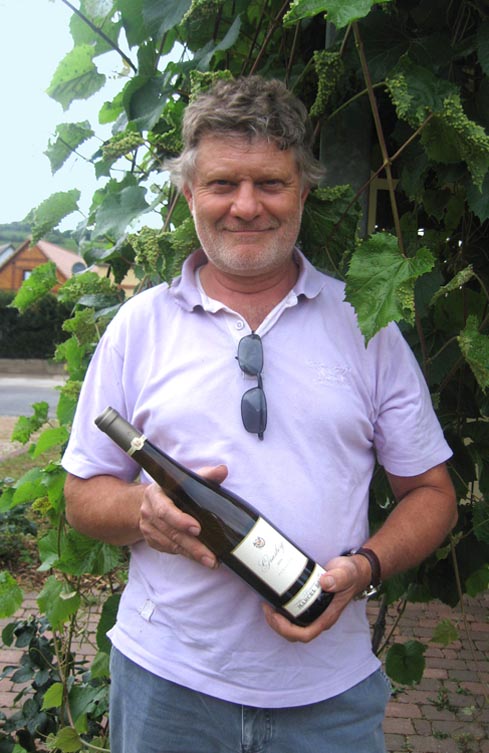 Domaine Marcel Deiss is located in Bergheim, a small village nestling in the heart of the wine region of Alsace, equidistant from the northern and southern boundaries of the region. Current winemaker Jean-Michel Deiss was born into a long-established family of wine growers, living at Bergheim since 1744. Managed today by Jean-Michel Deiss, the domaine consists of 26 hectares (52 acres) of hillside vineyards spread over 9 communes and approximately 20 kilometers.

The extreme variation in conditions of production at the domaine have led Jean-Michel Deiss to seek to express in each wine the three factors that make a wine complete: the grape variety, the vintage and the terroir. The greater the wine, the more the gustatory characteristics linked to the soil take the place of the typicity linked to grape variety or vintage. When speaking of terroir, the following have to be taken into consideration: geology, pedology, climate and microclimate, technical exploitation of the character of the soil, microfauna and flor, and the traditional methods and techniques used to produce wines.

This is our biodynamic: we always prefer the question to the answer, the quest for the certainty, the sensation and the desire to the precepts of the gurus. We don’t worry about making decisions to cultivate which parcels or to taste which cuvee, this kind of recall won’t wake us up in the night. Yes, our biodynamic is demanding, sometimes grueling, yes it is difficult to live in seeking the humanity inside each vine with one triumph among one thousand failures, an unbearable speech where the words themselves end up in telling contradictions. Finally, the victory seems almost a whole imposture! Someone says that biodynamic by itself is not immune to this crisis and that essentially speaking, by the personal approach, it is impossible to be institutionalize. No doubt this is true ... and it is probably the underlying reason for our unremitting attempt as terroir wine grower, tenderly, romantically and almost desperately because man is chosen to play the most humble role, looking tenderly at a world where the plant is the center, and which is united in the name of earth and sky.