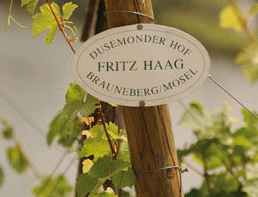 At the beginning of 2005, Oliver Haag took over the vineyard and, together with his wife Jessica, managed the skills of the House of Haag. Following apprenticeship at various well-known vineyards, such as Helmut Dönnhoff (Nahe) and Weingut Karthäuserhof (Ruwer) he studied at Geisenheim College (Fachhochschule), graduating with a diploma in oenology. After a stay at Mont du Toit in South Africa (the project was managed by Bernd Philippi and Bernhard Breuer) he joined the Wegeler family vineyard in Oestrich-Winkel. There, he ran the vineyard as manager for five years before returning to the Mosel in 2005, in order to take over as successor to the traditional vineyard of Fritz Haag.

Oliver Haag will continue the philosophy of his father, which is the production of fine, fruity, delicate Mosel Rieslings of unmistakable character. His father, Wilhelm Haag was born in 1937. In 1957 he interrupted his education abroad and returned home early because his father, Fritz was ill. He only planned to stay for the harvest but it developed into a life of winegrowing until the vineyard was handed over to the next generation. With ambition and the knowledge that there were very large locations available, the philosophy also developed that the target can only be achieved through quality. Great vintages in 1959, 1964, 1969, 1971, 1976, 1983, 1985, 1990, 1992, 1993 and 1994 followed, to mention but a few. His work and success proved him right: Wilhelm Haag was awarded “Winegrower of the year 1994″ for his achievements. His success naturally reinforced that striving for quality and brought the vineyard an outstanding, worldwide reputation as a Riesling producer.