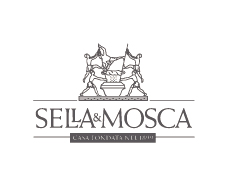 Over a century has passed since two adventurous Piedmont's men started to drain the land that is now occupied by over 541 hectares of Sella & Mosca vineyards. This very promising area with its enchanting landscape was the setting for the fortunate encounter of these two adventurous men, who were fascinated by the virgin terrain: the engineer Sella, nephew of the famous statesman Quintino Sella, and the lawyer Mosca. These are the origins of Sella & Mosca, which at the turn of the twentieth century transformed pastureland into fertile vineyards, commencing the most prestigious wine production in Sardinia. Today visitors to the charming estate relive this pioneering atmosphere in a continuous kaleidoscope of fragrances, perfumes and aromas that express the character of the powerful, sunny land and greatly contribute to the unmistakable personality of its wines. Respect for the place and the culture of wine, and closeness to the land and its traditions are the rules handed down by the founders, which have always inspired all Sella & Mosca’s work and determined its success. The founders of Sella & Mosca were keen amateur Egyptologists and great travelers. Their logo depicts a wine-pressing scene inspired by the Ancient Egyptian Kingdom. It is believed to be a stylized reproduction of a scene shown on a low relief in the mastaba of Mereruka, Vizier of King Teti, at Saqqara. The relief depicts five men using long poles to press the grapes contained in a sack, so that the juice filters through the fabric and falls into the jar below.