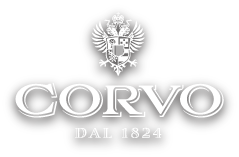 Corvo is a legend, a strong, long-established brand with the ability to communicate in new and current languages. A Sicilian classic benefiting from 200 years of tradition, it obtains the best from every vine thanks to its in-depth knowledge of all of the island’s geographical and climatic details and quality wine making processes. Corvo wines express personality, agreeableness, have an excellent quality/price ratio and are high quality products that can be enjoyed every day. An innate desire to spread the aromas of Sicily to lands near and far has always been part of the very essence of the Corvo brand.

Sicily’s reputation as a food and wine paradise has remained intact for more than 3,000 years. Beginning with the Greeks, who arrived on the eastern part of Sicily in the 8th century BCE, the idea of methodical grape growing practices for the purpose of quality winemaking firmly took root on the island. As the centuries passed, Phoenicians and Romans traded Sicilian wines based on their power and their distinctive qualities. The best vines were propagated, viticulture developed, and thus Sicilian wines were promoted on and off the island. Today, we see the fruits of these labors.