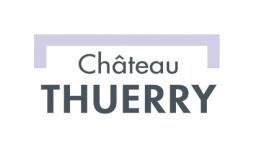 Château Thuerry, wine estate in Provence, is located at the entrance of the Haut-Var-Verdons Natural Park. Château Thuerry is above all a relationship between its people and its land that has continued throughout time. This majestic bastide dating back to the Templars Knights has roots that go deep into the heart of the Var hillsides.

The domain deploys its 300 hectares of lands over three communities, Villecroze, Flayosc and Tourtour. The hills create a naturel barrier that protect our wines against the Mistral. The earth consists of clay, limestone and pebbles. These grounds, where the respect for the earth concides with excellent wines, predestined to produce a wine of character, use a delicate balance of both traditional farming and modern wine making the best possible.

The vineyard has taken root over several decades, composed of various varieties of grape including, Syrah, Grenache, Cinsault, Rolle, in the last twenty five years, Cabernet Sauvignon and Semillon, more recently Merlot, of which compatibility with the Cabernet Sauvignon is well known and unmistakable. Our oldest vines having been planted with Cinsault in 1927 still produce a heady Rosé. Each season, we force ourselves to innovate by replanting with Merlot, Cabernet Sauvignon, and recently Mourvèdre, a variety specific to Provence.